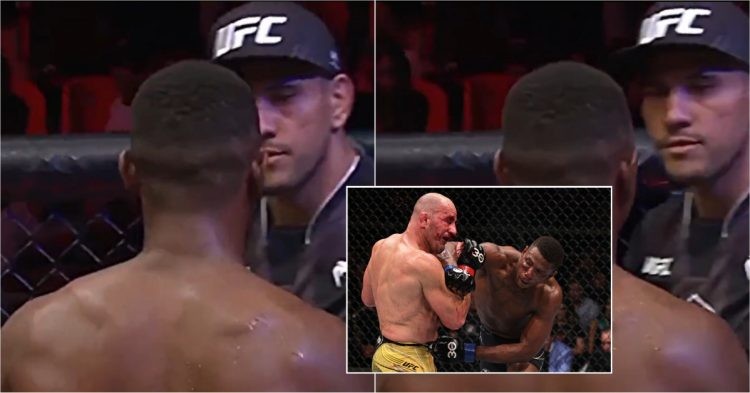 UFC 283 kicked off the company’s PPV slate in an immense way. From Jamahal Hill winning the light heavyweight title to Glover Teixeira and Shogun Rua’s retirement, the event was filled with bittersweet moments. But, right at the end of the card, fans got a tease of what to come next. It appears that Alex Pereira is eyeing an LHW title shot against Hill in the immediate future!

The UFC middleweight champion was inside the Octagon as Jamahal Hill got his hands around the title. Pereira was present in the cage as a part of Teixeira’s corner. Fans noticed that Pereira was sizing Hill up. Although Pereira was his usual stoic self, fans could tell that Poatan had a fire in his eyes. He just saw Hill dish out an immense amount of punishment on his friend.

The way Alex Pereira sized him up…

One title defence at Middleweight this year and I believe he gets his revenge and puts the ‘Sweet Dreams’ truly into Jamahal Hill. pic.twitter.com/TORqKC7Zqr

So there is a chance Pereira wants to get inside the Octagon to face Jamahal Hill next. At UFC 281, Alex won the middleweight belt against Israel Adesanya. Although it was a tough fight, Pereira did not suffer much damage during the contest. Adesanya, on the other hand, revealed his intentions to take a break from fighting. So it clears up the path for Alex Pereira to move up in weight.

Although there is no talk of the bout happening, there is no doubt that fans would love to see the fight. Both Hill and Pereira are strikers of an elite caliber. While Hill likes to dictate the pace of the fight, Pereira has a great counter-attacking style. Hence, their styles complement one another. But who will have the advantage in the bout? Let’s find out.

Jamahal Hill vs Alex Pereira: Who wins the fight?

While some may point out the weight difference, there are images of Alex being bigger than some heavyweight fighters. For his UFC 281 fight, Alex did not come into weigh-in till the last possible moment. So Alex would have a much better time making the weight as a light heavyweight. With Glover gone, it opens up the path for him to chase the title as well. On top of that, during his kickboxing days, Alex competed a heavyweight and light heavyweight.

Although Pereira is 35, he is not showing any signs of slowing down. So it would certainly make for an interesting fight. But one aspect of the contest which may favor Hill slightly more is the grappling. As fans saw earlier, Hill had success in defensive grappling against Glover. So it may be an area of concern for Pereira. But, after Glover’s fight, he added that he would train Alex Pereira for the bout.

So who do you think wins in a fight between two champions? Let us know in the comments down below.